SOUTH DAKOTA SOUTH DAKOTA is a unique film in which filmmaker Bruce Isacson intricately blends the powerful drama of a scripted motion picture along with the compelling impact of documentary elements. The film portrays two dramatic stories about unplanned pregnancies along with sound bites of passionate pro choice and pro life advocates.

Barb’s story is set in a South Dakota Norman Rockwell town. Barb is a 14-year-old high school track star and cheerleader in love with her 15-year-old star athlete boyfriend when a single moment of passion changes their lives forever. Barb is a "real-life" JUNO. Chris’s story is set in Philadelphia. Chris is a black teenager who is pregnant because of rape and lives with other runaways in parks and under bridges. Both girls deny their situation for too long as they avoid making the most important choice of their young lives. As Chris and Barb seek answers to help make their decision about having a baby or terminating the pregnancy, the film presents interviews with experts on those questions with opposing views about a woman’s right to choose.

As the stories unfold on the screen under Isacson’s direction of a talented cast, he simultaneously creates a fascinating mosaic of contradictory truths about the complex issues related to a woman’s right to choose. Through fast paced clips from documentary interviews with a wide range of political, scientific, legal and cultural experts who passionately share their views, Isacson assembles sound bites like pieces of a jigsaw puzzle to accentuate the labyrinthine nature of the situation faced by each young woman. The emotional conclusion of each story leaves audiences with a profoundly new understanding of a woman’s right to choose.

Our director/producer Bruce Isacson and our crew have been traveling for more than two years to interview the most knowledgeable people on both sides of the issue. Some of the strongest pro-choice voices have been Gloria Allred, Alexander Sanger, Peter Singer, Lee Silver, and Dr. Wendy Savage. From the pro-life side we have Robert George, Bill Hurlbut, Bernard Nathanson and Michael Schwartz.

Bruce said, “I was inspired to make this movie when I realized how little I knew about this volatile issue that has been front-page-news for many years. While filming I made the decision not to manipulate my audience with my point-of-view, so I stayed neutral allowing both sides to express themselves evenhandedly so the audience would have the freedom to reach their own intelligent conclusion. Women and men need to have enough information before they can make a rational decision when facing such an emotional choice.”

Our executive producer is Howard Kazanjian, Producer of Star Wars Return of the Jedi and Indiana Jones Raiders of the Lost Ark; our editor Donald “Corky” Ehlers also has terrific credits including Gods and Generals, Gettysburg and Lonesome Dove; Paul Lauer, founder of Motive Entertainment is directing our grassroots marketing campaign. Paul has personally overseen the grass roots marketing of such box office hits as The Passion of the Christ, The Chronicles of Narnia, The Polar Express, Rocky Balboa, Expelled and The Secret Life of Bees.

We have screened the movie for over 7000 people from Los Angeles to New York, to Amsterdam, Great Britain, Vienna, China and Australia of which 99% of the audiences were deeply riveted and emotionally impacted. 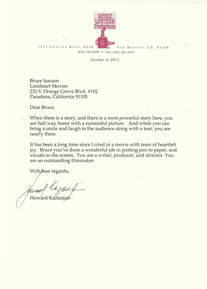 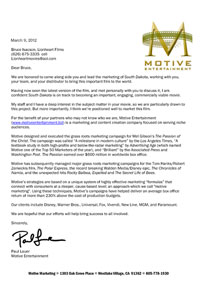 Letter from Paul Lauer of Motive Marketing Click to view

A woman’s right to choose has been one of the most controversial issues in the last four decades. This debate, as well as Teen Pregnancy that has become a worldwide epidemic, stirred me to produce an entertainment experience that would touch people’s hearts, while even-handedly portraying both sides.

I made the decision not to manipulate the audience with my personal opinions, but to allow moviegoers to reach their own intelligent conclusion after viewing the film.

The narrative full-length feature film evolved from the documentary I was filming on this topic. Compelling personal stories from people around the world inspired me to venture into the concept of weaving dramatic film with real-life documentary footage.

Historically documentaries draw small audiences, so my passion to bring clear understanding of the subject stirred me to dramatize two personal true-life stories from the documentary that would represent both sides of the issue. To enhance the information, emotion and relevance of the two dramatic stories we inter-cut them with the real documentary footage.

During production I realized how little I knew about this volatile issue. After filming many interviews I concluded that many people were as uninformed as I was on this subject. Women and men need to have enough information before they can make a rational decision when facing such an emotional choice. What better way to enlighten than an entertaining film, and that’s why I made “South Dakota.” In regard to teenagers, Gary Woods superintendent of Beverly Hills School District said it best, “I believe every young person needs to see ‘South Dakota’ and contemplate the impact of their choices related to dating and sexuality.”

Thank you for seeing the film and please get involve in the discussion that will ultimately help women and teens throughout the world.